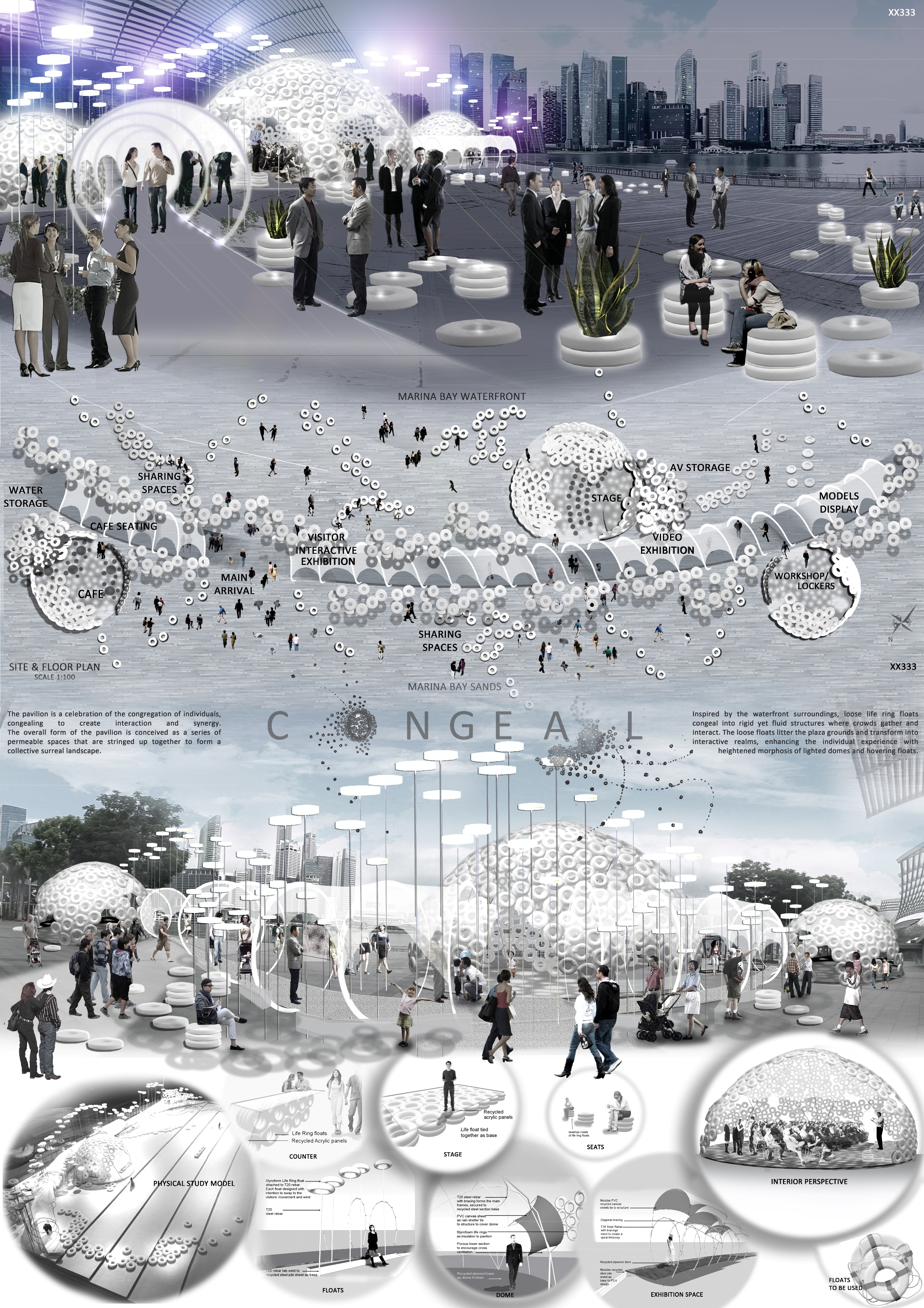 Singapore Archifest 2014 revolves around the theme “Crowd”. This design competition calls for registered architects to interpret and to translate the notion of crowd into a pavilion which will be built on the event plaza of Marina Bay Sands this September. The site is a linear footprint which covers approximately 60m X 10m area, overlooking the waterfront, a site that is arguably more prominent than the former proposals in 2012 and 2013. It will serve as a place for sharing and discussion, for hosting the opening night and some other exhibitions. With the budget of 50k (SGD), the pavilion will house a café for 50 seated guests, shelters 200 audiences, provide for ancillary services such as lockers,  AV storage, lockable kitchen counter and water storage. Materials used are to be recycled/recycleable or reused/reuseable.

Within the span of 2-3 weeks, YK (one whom I refer to as the QP, the qualified person/ registered architect) and I consolidated our concepts, our crit sessions with fellow colleagues and peer architects, our mock ups, study models and consultation with our nominated builder and structural engineer to produce an impression of what we believe responds to the theme “CROWD”.

1. The field condition: People, crowd, dynamic, playful. These are the impressions that we intended to convey through the use of small units congealing into organic forms and spaces. The layout expresses a burst of exciting synergy, interpreting the interaction that would take place between individuals from diverse background.

2. Floats as construction material: We sought for a material that relates to the waterfront and one that could be manipulated by the way of arrangement. Each unit amalgamates to create something new.

3. Phenomenology & practicality: One could easily use a more opaque or solid material to deal with rainwater and sunshading. The choice of material and way of assembly could either make or break the scheme. We chose permeability, we chose the beauty of light and shadow and we worked on realizing that intent through detailing.

1. Styrofoam is a no-no-no: It’s a given fact. It was a tug-of-war between YK and I. Inflatable tubes could have been a better choice, though prone to vandalism. Whatever it takes, flee from Styrofoam like its a plaque.

2. The key feature must have a purpose and convincing intent: The linkway which looks like a tunnel that cuts the field of floats.. was intended to embrace the site. However, it wasn’t convincing or justified, at least to me. On the contrary, it was out of place and it didn’t seem to link any ends/nodes. It was, at worst, an obstruction between MBS to the waterfront.

3. Be receptive: The above-mentioned was reiterated by other critics. No need to be defensive, be responsive.

4. The reality of competitions: It can be cruel. Neither the candidates nor the jury has a real clue to how the entries will be accessed or laid out until the appointed time. To an extreme, some hundreds of entries will be accessed in an hour or so. The selection of jury is also crucial and we are subjected to their personal understanding and preferential judgement. It requires the art of pitching within short glances.

5. Be deliberate (and pure): Do not compromise, it becomes lukewarm and reflects a lack of conviction. Here is my last and most important note: Strive for purity. If one wishes to express lightness, you shall seek all means possible to make it light than to resort to easier solution for the sake structural integrity.

The winner will be announced on 23rd June 2014, may the best design find its rightful place & best wishes to the shortlisted candidates!